Doctor Syntax and the Picturesque

The Digital Doctor Syntax Project aims to familiarize readers with production history, text, and images of the popular nineteenth-century text, The Tour of Doctor Syntax: In Search of the Picturesque. As the first modern critical edition of In Search of the Picturesque, the full text of this site will attempt to recreate the original reading experience. This site offers a full digital reprint of the the original publication of the tour, first published in The Poetical Magazine from 1809-1810, as well as high definition scans of the original 31 engravings, arranged as they appeared in The Poetical Magazine. Due to resource availability we have reproduced images from the first 1812 book edition, although placed according to the position of The Poetical Magazine.

The use of original Poetical Magazine text provides a stronger understanding of the work’s production history, as more fully described in our Critical Introduction. Furthermore, as a periodical publication within a magazine that lasted only two years, it is fascinating to note how much longer and frequently sections of the poem were being published towards the magazine’s close. For example, whereas the first installment in May 1809 was five pages long and installments came out once a month, six installments came out in November 1809. Six installments were also published in May 1810 and seven in November 1810; by November 1810 each installment was twelve to fifteen pages long (the last installment, of November 1810, the conclusion of Syntax, was nineteen pages). Despite the Poetical Magazine’s hurried close, the book format of the Tour re-thematized the poem, most obviously by changing the title from The Schoolmaster’s Tour to The Tour of Doctor Syntax: In Search of the Picturesque.

Although preserving the grammar and spelling of the original text, we have adjusted some printing conventions to suit a contemporary audience. We have also corrected some errors in the original text, including misspellings, improper grammar, or printer’s errors, with emendations from later editions. Currently, three cantos (Canto I, Canto II, and Canto XXIV) have been collated using The Poetical Magazine and the book’s first and second editions, identified as 1812a and 1812b, respectively. Our aim is to collate the Poetical Magazine text and images against the first two book editions from 1812. The collations reveal Combe’s pervasive editing from The Poetical Magazine text. Many phrases and words, for example, change between The Poetical Magazine and 1812a, while a significant number of similar but separate changes are made between 1812a and 1812b. Substantial content and structural changes appear in the first two book editions, and these have been accounted for in our online transcription. For example, the 1812 book divided the poem into twenty-six chapters, correlating to the twenty-five sections of the poem published in installments of The Poetical Magazine, plus a section added in the 1812 edition, identified by Combe’s preface to the first edition as “The Battle of the Books”. We have noted this added section, constituting Canto Twenty-Five, as a deviation from the Poetical Magazine text. Furthermore, although we have emended the “Canto” headings from the 1812 text, the original dates of publication and page numbers from The Poetical Magazine are noted prior to each corresponding text section. The use of “Canto” as a heading originates in the 1812 second edition.  Such headings were absent in the serialized Poetical Magazine, and the first edition implemented “Chapters.” That said, every edition after 1812 used “Canto” to divide each section, and to remain consistent with the scholarship, we have chosen to maintain the use of “Canto” instead of “Chapter.”

Selected annotations of excerpts are available on the site. These annotations will enhance the modern reader’s understanding by illuminating allusions to contemporary cultural debates, by identifying archaic words and phrases or obscure individuals, and translating when necessary. These annotations situate the text within the context of its contemporary culture by identifying key phrases where Combe’s satire targeted specific texts, critics, events, or fashions. Each annotation appears as darkened text within the verse; to access the annotation, hover your mouse above the specific text. Readers seeking more detailed analysis of the picturesque, poetry, travel literature, or biographical information regarding William Combe and Thomas Rowlandson should reference the critical resources available on this site. Our eventual aim is to annotate the full text and images in order to elucidate the relationship between text and image.

In addition to the edited digital edition of the text, this site offers a range of critical resources designed to explore concepts important to the historical production, reception, and legacy of The Tour of Doctor Syntax. “What is the Picturesque Tour” explains the picturesque through the influential writings and sketches of William Gilpin. This essay offers maps and images of the famous tour to guide the reader through the experience of a late-eighteenth century English tour.  “Who is Doctor Syntax?” introduces In Search of the Picturesque and Doctor Syntax himself from Rowlandson’s first conceptualization of the figure to its explosive popularity throughout Great Britain. The “Critical Introduction” provides scholarly analysis of several key themes as satirized in In Search of the Picturesque and looks at how Rowlandson and Combe both emulated and mocked cultural norms. There are also extensive biographies of Thomas Rowlandson, William Combe, and William Gilpin with access to digital facsimiles of their most famous works. The scans of the plates currently used on this site are thanks to Martin and Jean Norgate at Portsmouth University and their “Notes on Doctor Syntax.”

The Digital Doctor Syntax Project is still undergoing construction. As we build the site, we hope to bring more extensive collations, annotations, and notes on the text as well as new scans from the first edition book. We hope that readers find the currently available texts and notes useful.

The following abbreviations are used in the critical apparatus:

Critical Introduction to Doctor Syntax and its Major Themes: by Anne R. Fertig and Liz Shand. Scholarly essay that introduces readers to the major historical context and literary notes found in In Search of the Picturesque.

What is the Picturesque? Here you will find information related to William Gilpin’s theory of the picturesque and the subsequent commodification of travel literature and art.

Who is Doctor Syntax? This page surveys the publication history of Doctor Syntax in Search of the Picturesque, as well as its primary themes and prevalence in popular culture. 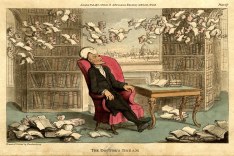 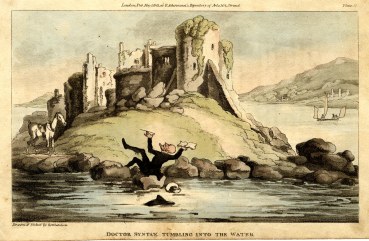 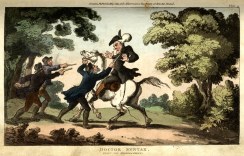